Saint Joseph’s Day and the traditional “Sfinci” – The video 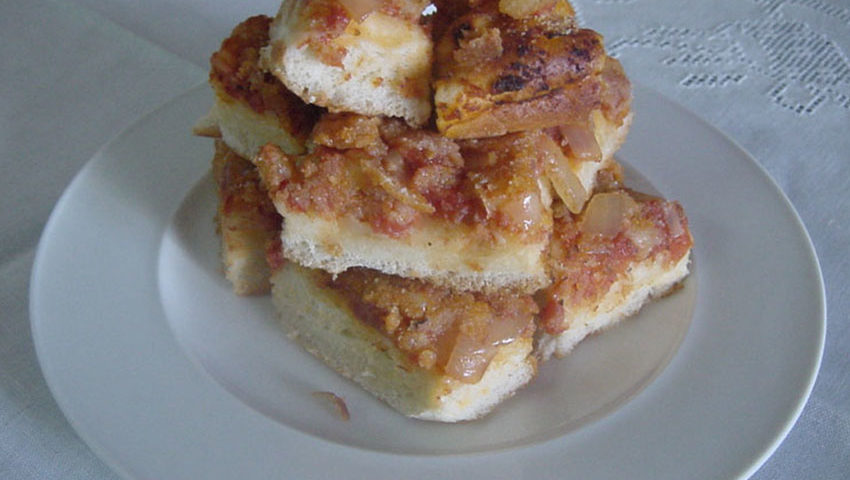 Do you know what “sfincione” is? This is the traditional name for our Sicilian pizza. Probably the name derives from the latin spongia, which means sponge, or from the Arab sfang, meaning a sweet soft fritter.

It’s a traditional recipe made of a very soft dough done with simple and genuine ingredients like: tomato sauce, onions, anchovies, the typical caciocavallo cheese and breadcrumbs. Some people also add sliced artichokes.

The secret of the making of sfincione is first the softness of the dough, and second the perfect proportion among the all ingredients, better if they are done one layer after another. 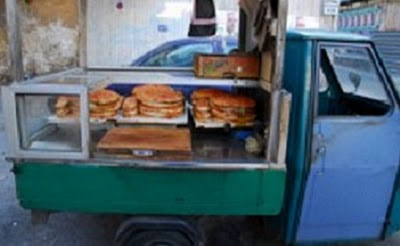 When you walk along the streets of Palermo is very common to see a small vehicle (similar to a pick-up but on three wheels) that sells portions of sfincione with a recording voice sent out through a megaphone that says how good is this kind of pizza. And indeed it is delicious!
For tradition we eat sfincione especially on two Festivities’ Eve: the night of the 7th of December, before the Immaculate Conception Day and on Christmas’ Eve, the 24th of December, but you can find it in bakeries every day of the year. If you pass by you may not forget to enjoy it!
Recipe for the dough: 500 gr flour 00 – 500 gr hard wheat flour – 1 ts sugar – 1tbs salt – 25 gr brewer’s yeast – 1/2 lt warm water – 1/2 glass of olive oil or 100 gr lard –
Recipe  for the condiment: 500 gr tomato sauce – 4 chopped onions slightly stewed – 50 gr anchovies – 350 gr caciocavallo cheese cubes – oregano – breadcrumbs – olive oil
1. Sift the two flours and put them in a bowl together.
2. Add salt and sugar.
3. In a smaller bowl put the yeast and add some warm water until it dissolves.
4. Little by little add the yeast with the water to the flour mix and start stirring all the ingredients together forming a dough.
5. Remove it from the bowl and transfer it on a kitchen surface (a bit floured), adding the remaining water and the olive oil (or the lard) and kneading for about 15 minutes until it becomes smooth and soft. Give it the shape of a ball.
6. Now the dough has to rise under a blanket in a warm place for about 2 hours. It has to double its volume.
7. Preheat the oven at 180° or 200° degrees; (It really depends on the oven).
8. Remember to stew and chop onions thinly, chop anchovies in small pieces and the cheese in cubes as well. Then, prepare some tomato sauce.
9. In a pan put some breadcrumbs with a drizzle of olive oil and toast it until golden brown.
10. After the 2 hours stretch out the dough and press into a large oiled baking tray. (It’s even better if you can let it rise in the tray for another half an hour.)
11. Cover the dough with the tomato sauce, the onions, the anchovies.
12. Put the tray in the oven for about 15 minutes.
13. Remove from oven and add the caciocavallo cut in small cubes, then cover all in breadcrumbs.
14. Put back inside the oven for some more minutes, about 10 minutes, again it depends on the oven and on how thick is the dough. Check after 5, just to be sure.
15. Bake the pizza in the oven at 180° degrees, until the bottom of the crust is golden brown when you lift it up to look.
16. Finally drizzle some more olive oil on top, sprinkle with oregano, cut in squares and serve hot! 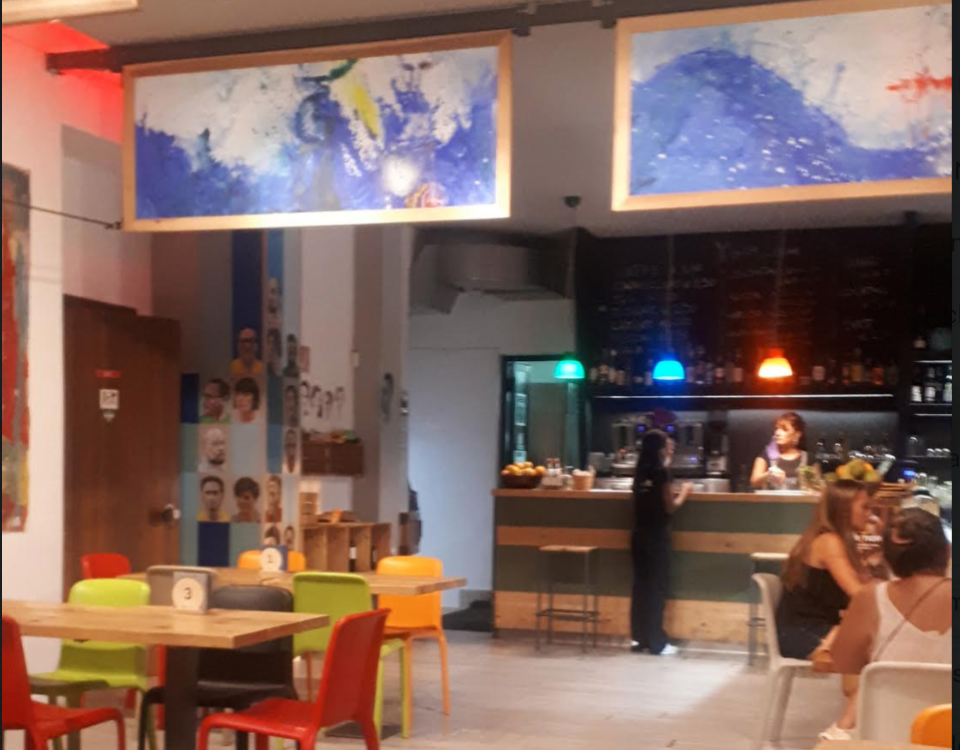 Moltivolti, a lot more than a simple restaurant in town 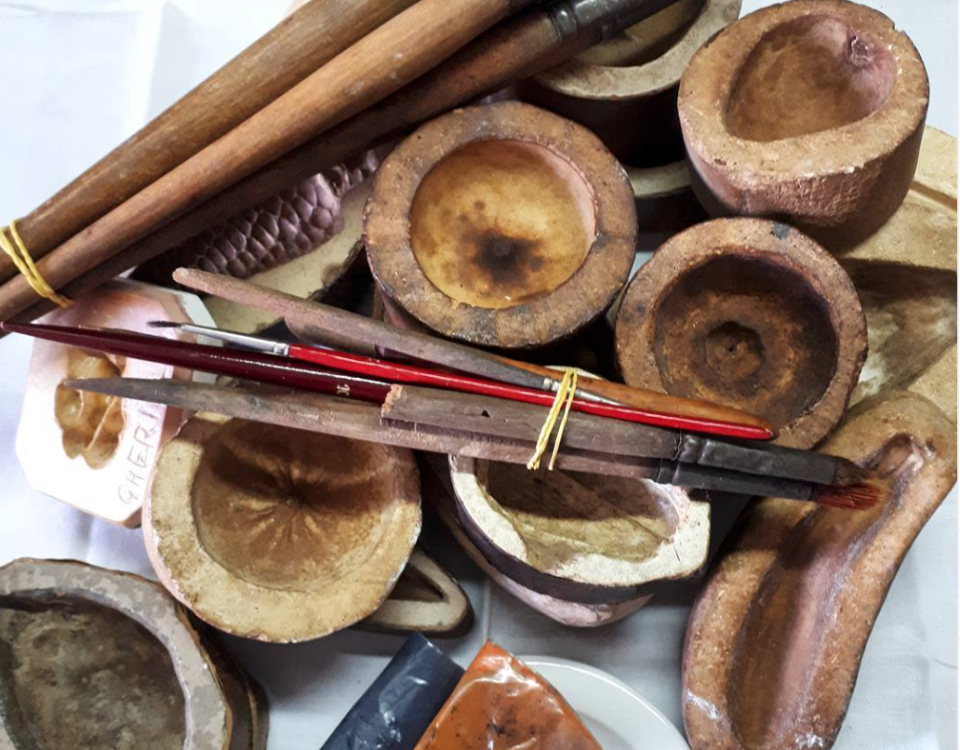 10 must haves that will make your kitchen scream “Sicilian” 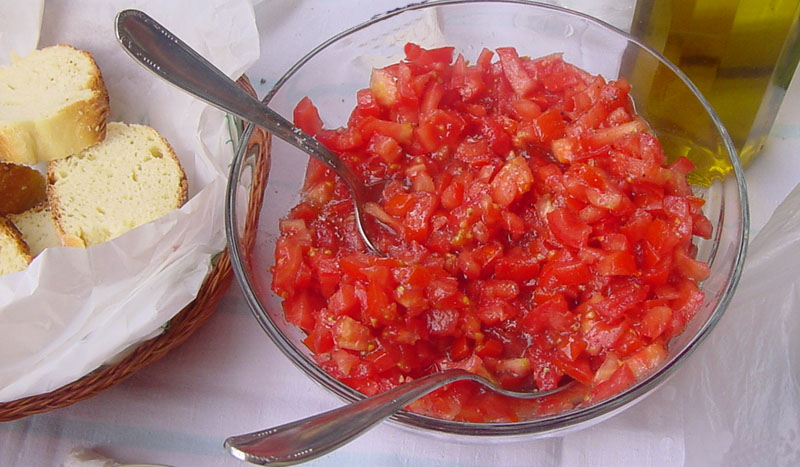