And the award goes to…

Saint Joseph’s Day and the traditional “Sfinci” – The video 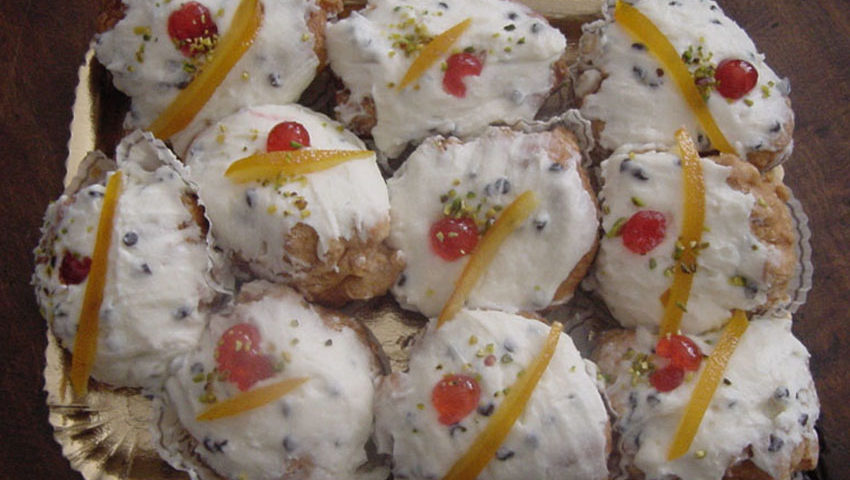 Do you know what Sicilians eat on Saint Joseph’s Day, the 19th of March? The traditional dessert that we prepare is called “Sfinci di San Giuseppe” and they are soft fried puffs with ricotta cream. According to history were the Arabs that introduced the sfinci here, they were initially covered in honey and afterwards replaced with ricotta cream. The name probably comes from isfang which means soft fritters.


A special thanks to the Pasticceria Amato, (via Favara 14/16), just in front of the Massimo Theatre in Palermo and in particular to Antonio Amato and Mr. Pino Amato that showed us how they still prepare these memorable sweets for the festivity.
Have a look at the recipe and the video. I am sure you’ll enjoy!!!

1. Sift the flour and add the salt
2. Put the water and the lard together in a  sauce pan on a medium heat and let them glue together. Just before boiling remove from gas and mix gently with the flour stirring the whole mix with a wooden spoon. The mix has to be extremely smooth.
3. Transfer now the mix in a blender and add one egg after another until stiffness is very creamy and soft.
4. Put some vegetable oil or lard in a deep pan and wait until very hot. Then, take a spoon of dough and dip them in the oil. Fry until they puff and become golden brown. Remove from oil and try to drain them on some paper.
5. After few minutes with a spatula or a knife and spread some ricotta cheese on top.
6. Decorate the sfince with a thin slice od candied orange and a cherry.
For the ricotta cream:
The sheep ricotta cheese must be very fresh and not too liquid. Mix the ricotta with the sugar. Stir until it turns very creamy, then add some dark chocolate chopped in small pieces.