Local Expert Award ? The Sicilian Cuisine Blog is in!!! 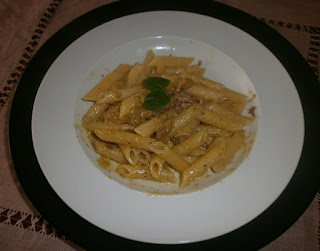 Do you know what the pesto of pistachio is? It is a sauce made of grounded pistachio from Bronte, a town near Catania, and it is mixed with some salt, pepper and oil of olive. It is a product that people normally buy in supermarkets but I don’t think you find it anywhere else out of Sicily. 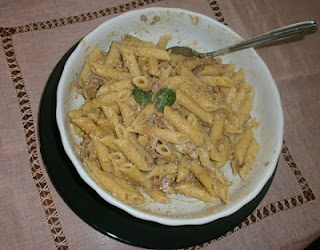 The recipe that I am going to put is something my mum and I created on a sunday morning, while we were thinking about an original nice way to dress our pasta. We like to try combining different ingredients so we decided to use not only a Sicilian pistachio’s pesto but also some speck, which is a smoked Parma ham typical of the region of Trentino Alto Adige, up in the north, added some creamy cheese as well and it was just fabulous! We couldn’t have a better result!
So with a little more imagination we can say that Italy is united in this dish also in our three colors of the flag 🙂
Ingredients & preparation for four people:
380 gr. penne rigate (or any other type of pasta you like)
4-5 tablespoons of pistachio’s pesto
80 gr. speck thinly sliced and chopped in pieces
2-3 tablespoons of creamy cheese (like Philadelphia or similar)
3-4 leaves fresh mint
some grated lemon zest
black pepper
Cook the penne as usual, adding salt when the water boils. While they are cooking, in another sauce pan or frying pan, put the chopped speck on a medium heat, after a couple of minutes add the pesto of pistachio and some hot water taken from the pasta, add the creamy cheese as well, a bit of black pepper, the leaves of mint and some grated lemon if you like them all and… voilà the sauce is ready!
As soon as the penne are cooked, drain and sautè them in the sauce pan with the dressing, mixing well all together. Sprinkle with Parmisan cheese on top and the whole of Italy is served right on your table!
Delicious!