Marzipan sheep, the symbol of Easter in Sicily 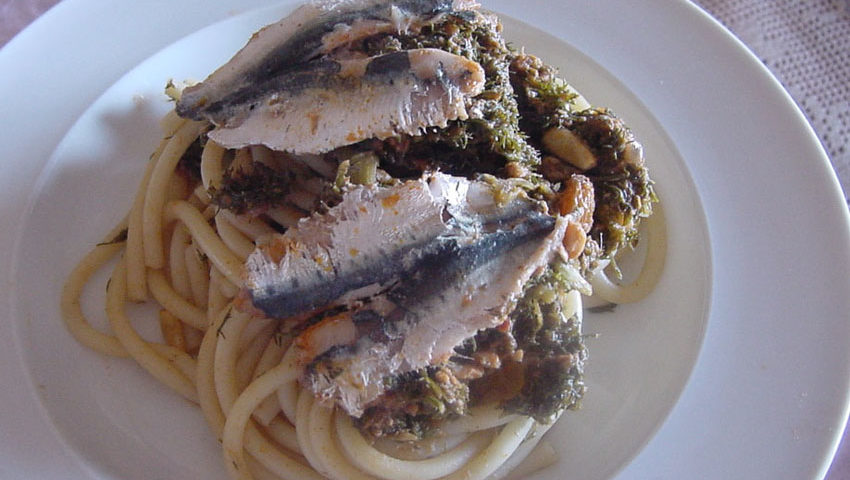 Do you know how to prepare the famous Sicilian pasta with sardines? First of all let’s specify that in Sicily we learn that the period for fishing and eating sardines is during the months that have a “R letter”. (In Italian are February, March, April, September, October, November, December). 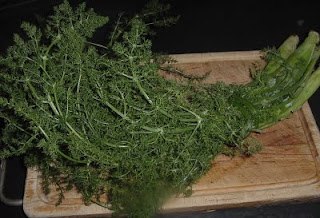 Said that you should know that the main ingredients of this dish are: sardines and wild fennel. As I always write about very traditional dishes it’s very common to find different versions of the same dish, depending on which province of Sicily you are from, but also on the individual family tradition.

On the whole, I would say that there are two main recipes for this pasta: the red one and the white one. What does it mean? It means the version with the tomato paste and the version with saffron instead.
Ingredients & preparation for 4 people:
– 400 gr. bucatini (long and thick shaped pasta like in the pic above)
– 250 gr. fresh sardines
– 400 gr. wild fennel
– 5 anchovy fillets
– 30 gr. sultanas
– 30 gr. pine nuts
– olive oil
– a small onion thinly chopped
– salt
– 6 ts of breadcrumbs
– 20 gr. saffron powder (for the white/yellow version)
– tomato puree or concentrated tomato extract (for the red version) 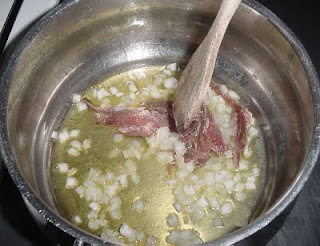 1. Wash sardines well under running water. Then wash also fennel and boil it in a large pot with salted water. Once it is cooked, drain it but do not eliminate the water. On a cutting board chop the fennel thinly and leave it aside.

2. In a sauce pan put a drizzle of olive oil on a medium heat, add the chopped onion and let it brown for a couple of minutes.
Add the anchovy fillets cutting it in small pieces using a wooden scoop or spatula just like in the pic on the right. They have to melt and become a paste. 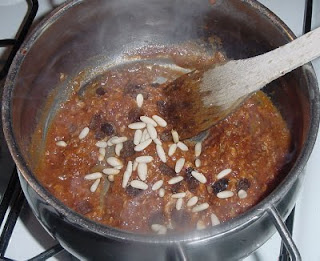 3. Then put sultanas and pine nuts mixing all together.

4. Take half the quantity of the sardines, (leaving out the ones that are not broken that will be used after) and mix them in the sauce in small pieces too.
5. At this point add the saffron if you are doing the white/yellow version, or add some tomato puree if you prefer the red one (pic on the left). It’s important to melt the concentrated tomato that has to become again a sort of paste. You can put a bit of fennel water to help melt the tomato puree. 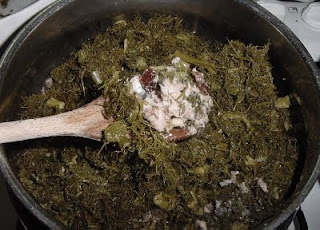 6. Finally put the chopped fennel in the pan, together with a dipper full of the water in which has cooked. Mix well and place on top of the fennel the remaining sardines that should all be in one-pieces. 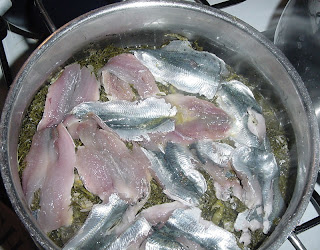 8. In the meantime cook the pasta (bucatini or ziti) in the remaining fennel water as usual and drain it. If the water is not enough for all the pasta add some more water but remember to check the pasta on salt before draining it.
9. While pasta is cooking, in a small frying pan on a medium heat prepare the breadcrumbs with a drizzle of olive oil and stir the two ingredients until they become homogeneous and kind of dark brown in color (but not burnt). 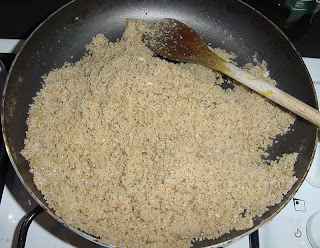 10. Now you can either place it on a serving dish covering it with all the condiment and sprinkle the breadcrumbs on top and eat it as it is or doing the same process but placing it on a oven tray and bake it for about 10 minutes at a temperature of 200° C. Serve hot.

Close your eyes for a second and enjoy the great Sicilian taste, the earth and the sea forever bond!