Sicilian Ragù: the classic seasoning for pasta and rotisserie

Time for harvesting the “green gold”: it’s the Bronte’s pistachio! 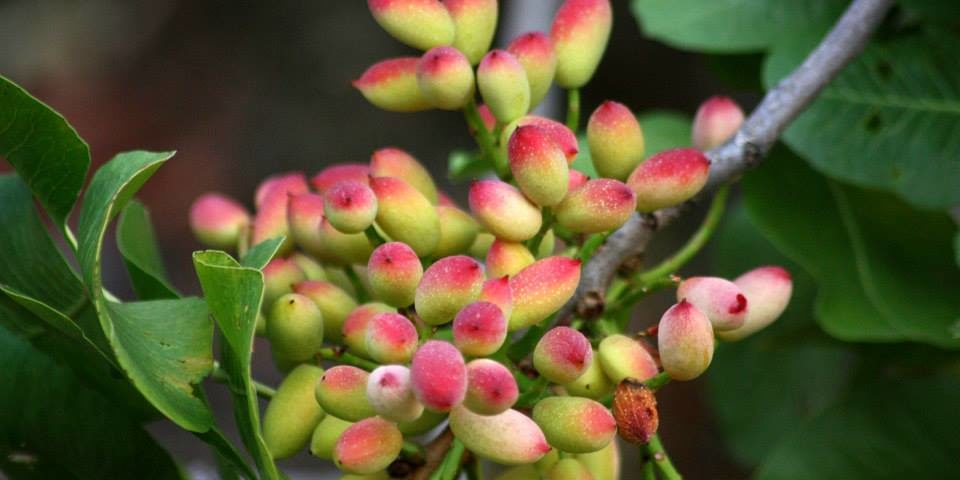 Do you know why the pistachio nut cultivated in Bronte (province of Catania) is one of the most important and renowned product of Sicily? And why is it called the GREEN GOLD?

I had the pleasure of asking these questions (and some more) to Giuseppe Di Bella (here on the right), an authentic ‘Brontese’ (Bronte’s citizen) who owns a piece of land, a pistacchieto, inherited by his grandfather where he still cultivates this amazing variety of nuts, which is a P.O.D. (Protected Origin Designation.) and is now being harvested.

Which are the origins of this beautiful plant in the town of Bronte? (Drops of history to start with…)

GDB: Bronte is a town at the slopes of Mount Etna, which lies in the valley of the Simeto river, in the eastern part of Sicily. In ancient times, our town used be part of a very extended feud who had different owners: first the Benedictines in the XVIth century, then the Great Hospital in Palermo and lastly the Duke and Admiral Horatio Nelson who received the land in perpetual property from Spanish King Ferdinand in 1800 for his support of the monarchy. Nelson gave the citizens of Bronte the possibility of working their land only in the rocky ‘SCIARE‘. These sciare are basically igneous lands, due to the continuous eruptions of the Etna volcano, so the territory is arid and rough, really difficult to cultivate. But despite this situation, the people of Bronte started to work and reclaim it, and finally found out that grafting the pistachios’ trees did actually take root pretty well there. So it started as a necessity more than anything else. 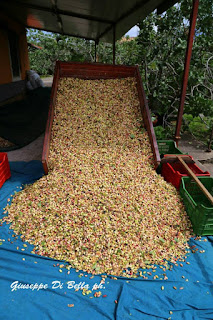 How does the pistachio’s cultivation and harvesting work? Why is it once every 2 years?

GDB: The reason why the harvest of our pistachio is once every two years is because this particular variety needs one year to rest from its last production.
It starts at the end of August and it lasts between four and six weeks. The time is different according to the altitude and position of the pistacchieto as the pistachio is cultivated between 400 and 900 mt of height above sea level, so the ones that are down in the valley start their harvest at the end of august, but as you go up on the hill it will be mid or late september. When is mature the pistachio becomes slightly pink and it means is ready!
What is so special about this variety of nut that is called the Green Gold?
GDB: It’s because every phase related to the production of our pistachio (cultivation, pruning, harvesting) is 100% manual labor. In some areas you can’t even use nets to harvest it because the territory is too rocky, so you have to pick it with your bare hands. That makes it precious!

There are also two other areas in Sicily were the pistachio is cultivated (in the province of Agrigento and Caltanissetta) but is a completely different variety and the colour is more yellowish, while our Bronte’s one is green inside and red outside, infact is also called: “Bronte’s red”, and for its organoleptic properties is similar to the Iranian pistachio tree. Our production in Italy covers the 98%, while in the whole world is only 1%. 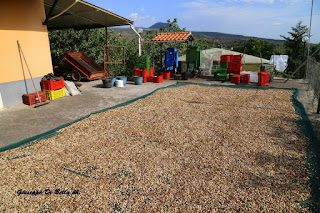 Does the pistachio have a particular meaning in your life?

GDB: Yes of course, but not in terms of money. For sentimental reasons. Infact I inherited this piece of land from my granpa and I remember when I was a kid, especially during summer breaks, waking up at 4.30 in the morning and just spending time with him, helping him out in whatever we needed to do in the pistacchieto. 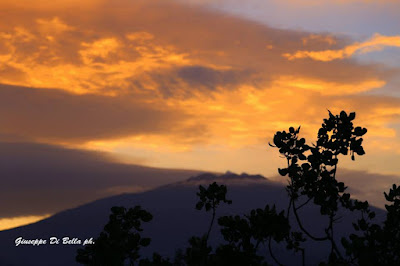 Every season I just coud’t wait to go there! This passion stayed with me and I am grateful because I can stay in my own land which I love dearly, if you just look at the amazing landscape I am surrounded by, you will understand!

Which is your favourite pistachios recipe?
GDB: You can prepare a lot of dishes with it, but in my opinion the best way to use our variety is in the patisserie or, in general, for desserts. And it’s also something recent as well, because 50 years ago we only used to sell it to retailers, while now things have changed and you can find several bars, restaurants or patisseries which actually use the pistachio in the preparation of recipes of any kind.

One of my favourite recipe is a kind of sponge, that we call panettone. You only need 6 eggs, 200 gr. grounded Bronte’s pistachio,  200 gr. sugar, 100 gr. flour and some lemon zest. You can either add yeast or not (not necessary) and is really delicate and tasty. You can filled it with our pistachio’s nutella cream or just have is plain for breakfast.

Also our cannoli filled with ricotta cream and pistaches are exquisite, but they are a winter product, as you can find the fresh ricotta only in winter. When you eat them is like paradise on earth, something beyond words! 🙂

I woul like to thank Giuseppe for being so kind, helpful and clear in answering all my questions, and Rossella for giving me his contact.

I wish I can go and visit him and the beautiful town of Bronte very soon. I have learnt a lot of things I didn’t know and I can’t wait to taste this amazing product in the area where all the magic happens!

Here you can find the dates of the Bronte’s pistachio EXPO 2015, at the end of September and beginning of October. Do not miss it!

[Note: All the pictures are property of Giuseppe Di Bella, except the last two which belong to bronteinsieme.it – ALL RIGHT RESERVED]