Saint Joseph’s bread and the devotion of the Altar

Embrace the Healthy Cuisine of Sicily on a Mediterranean Cruise 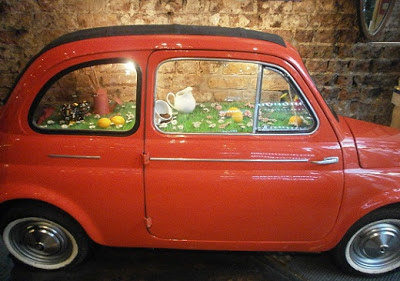 Do you remember when I talked about the famous and extremely popular Sicilian rotisserie? You find it in bars and cafès and one of the most appreciated pieces is definetely the ARANCINA, the huge rice ball fried and filled with mozzarella cheese and ham (al burro) or with Sicilian ragù made of minced meat sauce (alla carne). Delicious! Especially in Palermo everyone is crazy about our amazing arancine and one thing you don’t know for sure is that the noun is actually FEMININE in this part of the island! And it is a very big deal for us! So remember it when you visit Palermo and you want to try one, all right? 🙂

Recently, while I was in London, walking in the renowned area of Notting Hill I happened to find a food spot called: “Arancina, the traditional Sicilian pizzeria“. The name was curious to me, to start with, because in Sicily we have a lot of famous dishes, but the pizza is not something we export as Sicilians, while the arancina definetely is. We do have our tasty pizza called sfincione in Palermo, but to my surprise there was no trace of that in the pizzeria, so I gathered the owners could not be from Sicily and infact I was right.


The place was lovely, cosy and very nice decorated, the people kind and smiley, the location amazing and the pizza was really good, it reminded me about the traditional pizza a taglio they make in Rome: thin, soft and tasty. Obviously as a real Sicilian and a food blogger (perfect combination, isn’t it?) I had to try the arancina and see if it was like the original ones, but sadly my reaction was disappointment. Big disappointment. 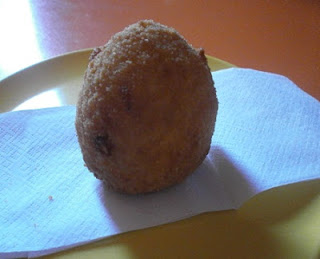 For two reasons: first the SIZE of them.
These ones were tiny ones... I would say “supplì” (originally again from Rome) with a different name.

Second the PRICE. A small fried ball of rice for 2.60 pounds.

In my opinion if you want to sell something at a high price because is exotic or sough after it’s ok, but at least sell it in the correct size. I would have preferred to spend 3.00 pounds for an original big sized arancina, rather than 2.60 for a tiny one.

The taste was ok, it wasn’t the exactly one but was good, …I was hungry and I ate it with pleasure, but to be honest it was gone in just three bites and that was it. That was my lunch.

Do you know which was one of the most important ingredient that was missing in there? SATISFACTION!
Having something that is scrumptious, very well made and leaves you full and happy? Plus, you eat it and think of your homeland,… missing it. It is something that has to do with food, but above all with memoirs, family, friends, tradition, connection. All in one arancina and it wasn’t accomplished at all!

So, I would recommed the place (here is the website) for a nice authentic Italian pizza a taglio, but I would suggest to work more on the arancina… at least on the size, because if you sell the real thing customers will triple! And in case you want to try the original ones, there is only one place: Palermo, Sicily!

Then, we can talk about TRUE SATISFACTION!!!!!